The Murphy District Field Of Dreams at Arthur Hamilton Elementary School is located in the heart of the Murphy Elementary School District south of 19th avenue & Buckeye (on the Durango curve). The Field of Dreams provides local players and athletes from the surrounding area an opportunity, though sports, and allows the community to thrive spiritually, socially, physically, academically and athletically.

2004: Making A Vision A Reality
PHOENIX ROTARY 100 FIELD OF DREAMS
A ROTARY INTERNATIONAL
CENTENNIAL COMMUNITY PROJECT
Hidden next to one of the busiest freeways in Phoenix, students at Arthur M. Hamilton Elementary School played games on a dirt field under the mid-day sun of another hot day in May. A field that would soon hold the Phoenix Rotary 100 Field of Dreams, a park and sports complex for the Murphy School District and neighboring community.

Hamilton Elementary School educates kindergarten through eighth graders in a predominantly Hispanic community in South Phoenix. Here, the median annual income for a family of four is $12,000. All of the students who attend Hamilton are provided free breakfast and lunch to ensure the students get proper nourishment.

In 1999, Phoenix Rotary 100 became involved with the school by participating in a tree-planting program at the school under then President Dick Potts (1999-2000). Phoenix Rotary 100's participation with Hamilton expanded in 2001 as a result of an article that appeared in The Arizona Republic in which then Assistant Principal Patrick Higuera described the challenges of finding volunteers to help inner city schools. Rotarian Barry Peretz went to Hamilton to see how he could help. He was impressed with the pride that Hamilton staff and students had for their school, but he saw many areas in which Hamilton needed help.

Many students throughout the school struggle to meet the minimum reading requirements. They enter the school at all grade levels with very little or no prior English training, and some have never even held a book before their first day of school.
After his visit, Barry met with Phoenix Rotary 100 President Mike Hosking (2001-02) to discuss his observations of areas around the school campus that needed volunteers and funding. In response to those needs, President Mike adopted Hamilton Elementary School as one of his major projects during his presidency.

Under the leadership of Barry, Phoenix Rotary 100 members began volunteering at Hamilton from 9:00am 10:30am, a period set aside for reading throughout the school. Volunteers spend that time reading one-on-one with students, as well as reading to the whole class.
Phoenix Rotary 100 members soon recognized another need at the school: the nurse at Hamilton was overwhelmed with the demands of students and families. She was providing requisite medical services to students, but was also acting as a counselor and advisor to many of the families.

Rotarian Dr. Paul Mittman stepped up to the plate. Working together, Patrick Higuera, Dr. Paul and other Phoenix Rotary 100 members developed plans for an on-campus clinic for family members with medical needs and no insurance coverage. In October 2002, the clinic was approved by the state and school governing boards, and opened to the public. Today, the clinic provides medical services by professional doctors and nurses to families in need.

During the 2001 school year, Phoenix Rotary 100 members provided all 550 Hamilton students with backpacks with the school logo emblazoned on the front. The bags were filled with the school supplies for their classes. Also, Rotarian Jim Soudriette began his project to supply computers for all of the classrooms.

For Christmas 2001, Phoenix Rotary 100 members hosted and accompanied all of the Hamilton School students to a Harkins theater for a special showing of Harry Potter and the Sorcerer's Stone - the first Harry Potter movie. The outing was arranged by Rotarian Barry and underwritten by generous donations from Phoenix Rotary 100 members. Many of these students had never seen a movie before! All of the students were treated to the standard movie fare of popcorn, candy and soda to enhance their experience. The donations were so plentiful, all Hamilton School students were able to go to the second Harry Potter movie, Harry Potter and the Chamber of Secrets in December 2002.
In 2003, with Rotary International's 100th birthday approaching, Phoenix Rotary 100 members began evaluating opportunities for a club Centennial Community Project. Barry Peretz met with Patrick Higuera in search of a project monumental enough to warrant the Centennial Community Project title. After several ideas, Barry focused on the dirt field behind the school -- and the idea of a multi-use sporting facility and park grew.

When Rotarians met to discuss and brainstorm ideas for the Centennial Community Project, the Field of Dreams concept quickly became the project of choice.

“When we build it, they will come” was the message from President Phyllis Metcalf Senseman as she announced the two-year Field of Dreams project to the members of Phoenix Rotary 100 at the July 11, 2003 meeting.

The project was embraced by the membership and a financial plan was formulated. Fund raising for the project began with the October 2003 Field of Dreams Dinner and Auction. Through the efforts of the Rotary Youth Services Committee, chaired by Georgia Ray Wolfe, and attended by more than 350 generous Rotarians and friends, the event raised $110,000. Phoenix Rotary Club Charities contributed an additional $50,000 to the Field of Dreams. Grants were applied for - Rotarian Al Gjersvig helped with the grant writing, and the project received all five of the grants - Arizona Cardinals/NFL Grassroots Program, Phoenix Thunderbirds, Arizona Sports and Tourism Authority, City of Phoenix-Neighborhood Block Grants, and the Arizona Diamondbacks, Danny Bautista and A.P.S.

Betty Hirshberg donated funds to build the ramada and Bob and Marjorie Raskin funded the basketball court lights. Architect Rotarian Rich Pawelko donated his time and personnel to create the architectural drawings for the project and worked with the contractors. Attorney Rotarian Roger Marce donated legal services to guide us through the maze of regulations, documents and agreements for the project. Other Rotarians provided substantial in-kind donations for construction of the field, while still other Rotarians lobbied Phoenix City Council members to gain support for maintenance of the field by the City. And a committee of coaches, sports associations and representatives from the Phoenix Parks and Recreation Department are planning organized sports programs at the facility. Many Rotarians helped with this project, and the community at large is taking an active role as well. “You can't help but fall in love with this,” says Barry Peretz.
The Phoenix Rotary 100 Field of Dreams is a way to bring the entire Murphy School District together and form a closer-knit community. All four schools in the District are within a mile of the site, and through intramural sports programs, all the schools will interact among each other and with other schools in the Valley.

The field will be open to the general public, and hopes are high it will bring the entire community together in
a safe and positive environment.
“A large part of keeping children in school is providing outlets for their creativity and boundless energy. Sports provide that outlet, and allow a child to experience personal and team success.” says Raj K. Chopra, PhD., Superintendent Phoenix Union High School District and Phoenix Rotary 100 member.
“It will be special,” says Barry. “Kids will pay back the community by being better citizens.” On behalf of Rotarians, he says, “We will get the satisfaction of seeing them play.” 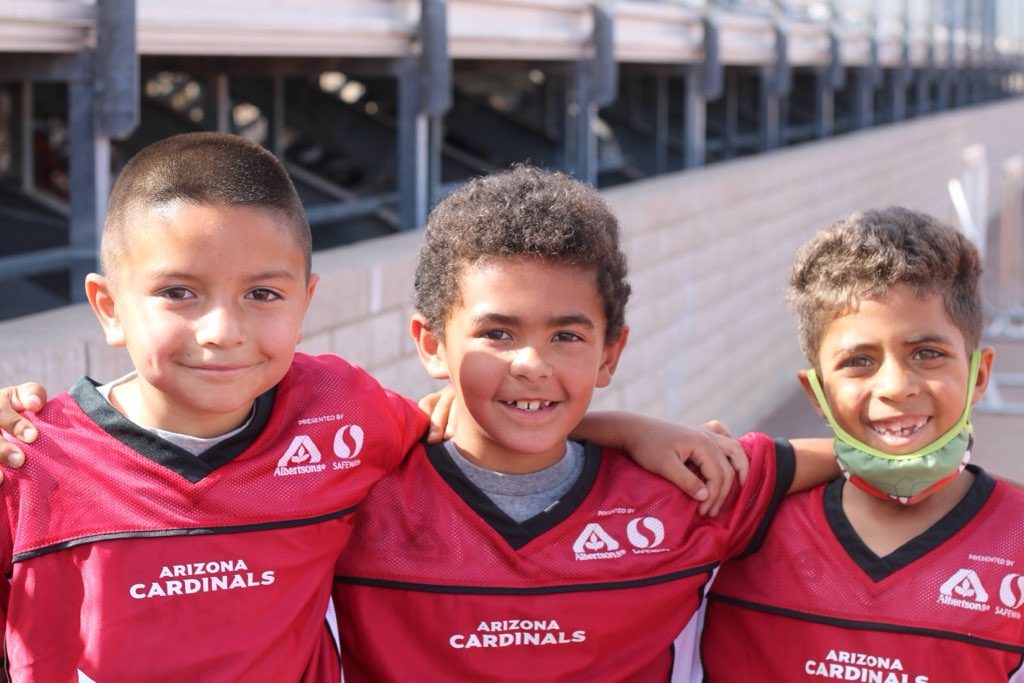 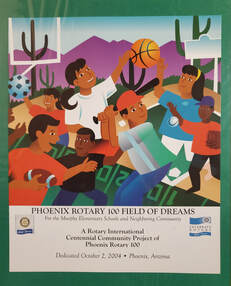